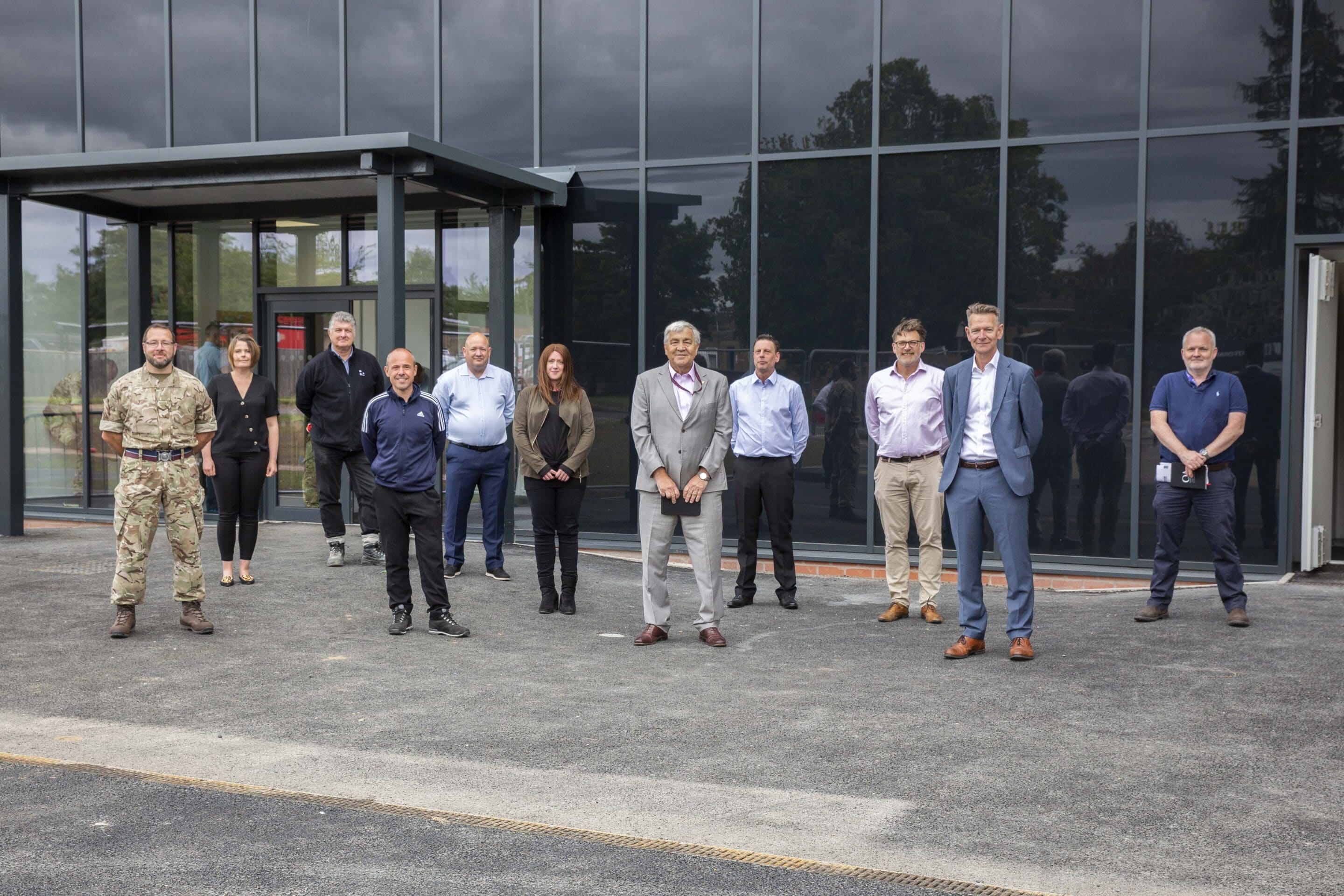 Henry Brothers Midlands has completed the refurbishment of a hangar at RAF Waddington to convert it into a joint training facility, on behalf of the Defence Infrastructure Organisation (DIO).

Simulators allow certain forms of training to be undertaken without the need for flying, which represents a significant cost saving. The new facility at RAF Waddington acts as a central hub which connects existing RAF simulators around the country, allowing multiple simulators to work together in daily repeatable exercises.

The work has been undertaken by Henry Brothers Midlands at a cost of about £8m.

The project team faced a number of challenges including working around RAF training periods and carefully timing noisy work to reduce disruption. RAF personnel were training only three metres away from parts of the work, so the team built a temporary wall and adapted their construction techniques and hours of work to make sure they did not interrupt training. A great relationship with the Air Battlespace Training Facility was vital to make sure they could continue training to maximum effect.

Like everyone, the team also had to deal with the impact of COVID-19. Work halted in March for four weeks while steps were taken to ensure the project could continue safely. It also understandably caused a delay in delivery of materials needed for the project but a proactive attitude and close working relationships between DIO, Henry Brothers Midlands, the RAF and Boeing UK helped to reduce the impact.

“I’m really pleased with how everyone pulled together not just to deal with the many challenges presented by construction in the age of COVID-19, but also throughout the rest of the project. The end result is a tremendous facility which will be of great benefit to the team at RAF Waddington and RAF aircrew community across the country.”

“The completion of this infrastructure project is the first stage of a larger programme of the Royal Air Force’s future synthetic training capability. This new capability, known as Gladiator, will provide a step-change in the ability of our front-line Forces to train together in operationally realistic situations to meet an ever-increasing adversary threat.

“The successful completion of this project is a shining example of collaboration between the Royal Air Force as an end user, DIO as the delivery agent and Henry Brothers Midlands as the construction partner to deliver a facility to meet the future requirements of collective synthetic training.”

“My team and I have been working closely with the Programme and DIO teams throughout the design and construction process to ensure our requirements were fully understood and met. I have been really impressed by the collaborative approach everyone involved has taken to work as one team to deliver this new facility. We are very excited to take over this facility and work towards the delivery of the next generation collective synthetic training exercises.”

“This project is the latest in a number of defence projects undertaken by Henry Brothers Midlands in recent times and the third consecutive development at RAF Waddington. We are delighted to have handed over the facility and look forward to continuing our relationship with the base.”

Nottingham-based Henry Brothers Midlands is part of The Henry Group, which comprises a number of manufacturing and construction sector companies, ranging from external construction through to interiors fit-out. In partnership with clients, it has a proven track record in defence, along with education, accommodation, commercial, industrial, transport and healthcare sectors.

The newly-refurbished hangar has now been handed over to RAF Waddington’s Air Battlespace Training Centre, who will run the facility and work with Boeing Defence UK, to co-ordinate the fit-out of the simulator equipment.